On 21.10.2022 we had the opportunity to hold our first ever AHOJ workshop with a group of high school students. The 11th grade from the „Samuel-Heinicke-Fachoberschule des Augustinum“ in Munich hosted young people from Toruń’s „VI LO im. Zesłańców Sybiru“ high school for a week.

Our workshop was the finale before the long journey home. We took the chance to interview the polish and german students about their intercultural experiences. How will they remember their time in Poland, or vice versa, in Germany?

The German teens were very excited to visit Poland. Most of them knew almost nothing about Polish culture and history, thus they were very curious and had a blank space to fill in for themselves. Some time before the workshop, the group traveled to the towns of Gdańsk and Toruń.

There they had a full program of sightseeing and activities. Especially the Solidarność museum in Gdańsk and the workers strikes deeply impressed them. The group also visited Westerplatte, a tragic spot in German-Polish history, where WWII first began in 1939. Luckily, both groups were able to move on from the past during the stay and spent some evenings in the local pubs. One girl from Munich told us:

„I highly enjoyed hanging out together in the beautiful old towns of Gdańsk and Toruń. Going to the Karaoke bar in Toruń was a lot of fun!
Sitting by the river Vistula (Weichsel / Wisła) was very relaxing.“

„Our sausage is still better than polish sausage.“,  another German student noted in his review. We from AHOJ Nachbarn say this is up for discussion, as we looove kiełbasa  🌭

„I had a bit of money left from the trip to Poland and wanted to give it to a girl. She was uncomfortable with it and I didn’t expect that.“

Some months later, the Polish class made their way to Munich. What would they encounter there? Many of them had never been to Germany before or have not participated in an intercultural exchange beforehand.

Some of the Polish students remembered being nervous before coming to Munich. One of them told us:

“I thought my English would be too weak and that the German pupils would correct me constantly. But I was wrong, and we understood each other well!”

Others were sad about leaving their friends behind at home. At the same time the young people were excited to visit historical spots in Munich and learn more about German culture. The young people particularly liked Munich’s local architecture and legends, like the story of Satan’s footprint at the Marienkirche cathedral. Our (quite complicated) public transport system was also a hit!

Most often, our visitors liked comparing Bavarian cuisine to their own. It was a common theme in both youth groups.

“German Schnitzel is just like our kotlet!”
“The beer is very good and cheap.” 🍻
(Cheers to that 😉)

Still many of the Polish students found it difficult to start a conversation with their exchange partners. Therefore it is no suprise that joint activities were a real ice breaker and helped overcome mutual shyness. Many would have liked more free time to connect to each other outside of the official setting.

Another question we asked was: “What does Europe mean to you?”

The students, both from Poland and Germany, answered:

“Europe is my home.”
“Europe is a community of shared values.”
„It’s a place for travelling and meeting different cultures.“
„In Europe I feel safe and free.“

We were glad to see students from two neighbouring countries agreeing on positive aspects of the multinational and multicultural community we live in.
During our workshop, we also chatted with the participants and discovered that many of them hadn’t recapped the exchange program up until that point.

Especially the German group seemed relaxed and casual about the experience.
On the other hand, many Polish students had gathered strong impressions during the trip. Some wanted to discuss history and the difference in teaching about the past.

There was a visible need for deeper discussions among the young people, which should be openly addressed by future cultural exchange programs. We from AHOJ hope for more meetings between polish and german youth so that both can overcome barriers between the nations. After all, we all love beer 🍻 🍻 🍻

Personal comment: Thank you for reading! This is my first article for AHOJ Nachbarn and I hope you had fun reading it. Also, I want to thank Kamil Safin for organizing the workshop and especially both student groups for their time and the openness they showed us. Auf Wiedersehen und na razie! Alicja 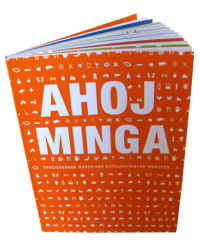